For April 28, 2019
One day, there was a person who was quite nervous and agitated. Anyone could readily see that they were deeply troubled about something, and while they explained their quandary, tears were welling in both eyes.

Then came the words many of us have expressed at some point in life: “I pray to the Lord, and nothing happens! Is the Lord really at work in my life?” 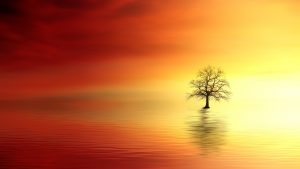 I suppose this was how the lame man felt before he encountered the Lord at the Pool of Bethesda on that fateful Sabbath Day (Saturday). Although nothing is said about how long he had been coming to the pool looking for a miracle, according to John Chapter 5, the man had been lame 38 years.

For according to legend, an angel of the Lord would stir up the water, and the first person into the churning pool would be healed of whatever disease he or she had. The man wanted to be healed, but was never fast enough to reach the water first.

Weary and discouraged, the man explained his affliction to the Lord, who simply instructed him stand up and walk—taking his mat (for sitting and reclining) with him, and the man was healed instantly.

The crowd condemned Jesus, the Great Physician for healing the man on the Sabbath, to which the Lord replied: “My Father is always working, and so am I!” (John 5:17 NLT) More than six-thousand years of human history reveal the Lord’s marvelous work.

I can imagine how hopeless Adam and Eve must have felt when they buried  Abel, their murdered son who practiced a greater level of faith in God than did his elder brother and murderer, Cain.

However, it is through Seth, the Lord reminds us He is with us in adversity, and that His plans are infallible. Eve soon gives birth to Seth, whom the Lord uses as a replacement for the noble Abel, and shortly after the birth of Enos, Seth’s son, the Bible tells us that people begin to “call on the name of the Lord.” (Genesis 4:26)

Twenty-five years passes, and Abram and Sarai have not received their promised heir. Yet their abiding trust in the Lord is rewarded, according to Romans 4:18-21 (NIV):

Against all hope, Abraham in hope believed and so became the father of many nations, just as it had been said to him, “So shall your offspring be.” Without weakening in his faith, he faced the fact that his body was as good as dead—since he was about a hundred years old—and that Sarah’s womb was also dead. Yet he did not waver through unbelief regarding the promise of God, but was strengthened in his faith and gave glory to God, being fully persuaded that God had power to do what he had promised.

Joseph suffered thirteen years of wrongful injustice and imprisonment before he saw the fulfillment of the series of dreams from the Lord concerning his destiny, and that of his family. Full of faith, Joseph confessed to his brothers in Genesis 50:20 (NLT): “You intended to harm me, but God intended it all for good. He brought me to this position so I could save the lives of many people.”

Isaiah 40:27 poses a rhetorical question: “Why do you say my way is hidden from the Lord; my cause is disregarded by my God?” While King David exclaims in Psalm 27:13-14 (KJV): “I had fainted, unless I had believed to see the goodness of the LORD in the land of the living. Wait on the LORD: be of good courage, and he shall strengthen thine heart: wait, I say, on the LORD.”

At the impending doom of Jerusalem, God chosen city, and with the first wave of exiles departing the city under Chaldean escort, Habakkuk seems perplexed by God’s method of chastening His Chosen People. Ultimately, he comes to understand the just shall live by faith1 just before he concludes with this exclamation:

Even though the fig trees have no blossoms, and there are no grapes on the vines; even though the olive crop fails, and the fields lie empty and barren; even though the flocks die in the fields, and the cattle barns are empty, yet I will rejoice in the LORD! I will be joyful in the God of my salvation! The Sovereign LORD is my strength! He makes me as surefooted as a deer, able to tread upon the heights. Habakkuk 3:17-19 (NIV)

Because the Lord is infinite and almighty, and we are finite and frail, it is normal for us to experience feelings of intense doubt and fear when life’s circumstances seem to overwhelm us. There are times in my life when answers are not clear, and the Lord seems absent. Yet in retrospect, in every situation, the Lord continues to be faithful…in every possible way.

Our Christian life is a “faith-walk” that will not be understood completely until we meet our Lord and Savior, Jesus Christ either at death or upon His return. Until that glorious day, we can have the assurance that He is at work in us; with a promise that He will never leave nor forsake us. What a wonderful Savior!