For April 7, 2019
What an exciting week for people in and around Jerusalem! Sunday, a Triumphal Entry captured the hopes and dreams of those who heralded Jesus Christ as the promised Messiah. The next day, Temple gatherers witnessed the Lord purging the Temple from unauthorized vending and money changing.

Then Jesus forever settles the dispute concerning His Kingdom authority, an unidentified woman, whom John indicates as Mary (John 12:3), anoints Jesus’ feet with very precious aromatic oil, Jesus and the Disciples find brief seclusion, and then He requests a furnished room for the Passover Observance. 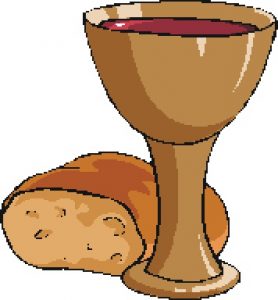 forward to the Passover celebration, which is the festive gathering for all Jews to commemorate God’s deliverance from 400 years of Egyptian bondage by the hand of Moses.

But for the Twelve Disciples it was a much-need break from a busy week…or so they thought.

However, from the outset, this particular Passover observance was distinctly and uncharacteristically different from any they had ever experienced before or since.

After settling the discussion about who would be the greatest in the Kingdom, the Lord served as house servant and performed the ancient tradition of washing His Disciples’ feet by cleaning the dirt and dust that accumulated on their feet as they traveled the dusty Palestinian roads in open sandals.

Jesus spoke very graphically and candidly of His dying, their betrayal, denial, and ultimate desertion. Then inexplicably, Judas left the celebration without muttering a word. From first glance, one could rightly say that this very special celebration was ruined—completely!

Yet as the chaos subsided, a strange thing happened. Instead of the usual Seder recitation, Jesus changes it by taking the bread, blessing it, braking it, and giving it to His Disciples while saying: “Take, eat; this is My body!”

Then Jesus takes the cup, gives thanks, and while passing it to them He says: “Drink ye all of it; for this is My blood, a New Covenant, which is shed for many for the remission of sins. But I say to you: I will not drink of this fruit of the vine until that day when I drink it new with you in my Father’s kingdom! Do this in remembrance of Me!”1

I can imagine how while the Disciples were leaving the room, singing a hymn, and accompanying the Lord to the Mount of Olives, they were asking themselves: “Why did the Lord change the Seder so unconventionally?” and “What did He mean by saying: This is My body and blood—a New Covenant?”

They would have the answers to these two questions within the next seventy-two hours.