For November 15, 2020
In His Parable of the Unforgiving Servant (Matthew 18:21—35), the Lord teaches a profound lesson on forgiveness and social civility. However, this lesson also has a stern and somber warning that is most relevant today,

“But when that servant went out, he found one of his fellow servants who owed him a hundred silver coins. He grabbed him and began to choke him. ‘Pay back what you owe me!’ he demanded. “His fellow servant fell to 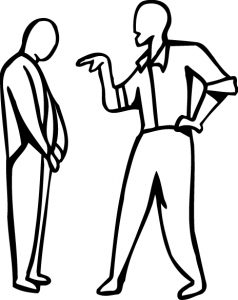 his knees and begged him, ‘Be patient with me, and I will pay it back.’ “But he refused. Instead, he went off and had the man thrown into prison until he could pay the debt. When the other servants saw what had happened, they were outraged and went and told their master everything that had happened. “Then the master called the servant in. ‘You wicked servant,’ he said, ‘I canceled all that debt of yours because you begged me to. Shouldn’t you have had mercy on your fellow servant just as I had on you?’ In anger his master handed him over to the jailers to be tortured, until he should pay back all he owed. “This is how my heavenly Father will treat each of you unless you forgive your brother or sister from your heart.” (Matthew 18:28-35 NIV).

In this story, the Unforgiving Servant mismanages a portion of the Forgiving King’s estate and is solely responsible for a several million dollar debt. By law, the Forgiving King should have had the servant and his family imprisoned with his property confiscated until the entire debt was settled.

The servant had nothing to bargain with. He owned nothing that would satisfy a debt that would have taken him several lifetimes to repay. In addition, the likelihood of him repaying the debt from prison was utterly impossible.

When the servant begs for forgiveness, the Forgiving King does something extraordinary. Moved with compassion, he extends unmerited favor toward a debtor in desperate need of complete forgiveness, as one commentator notes,

In the parable of the unforgiving slave, the first slave owes the king ten thousand talents. Given the enormity of his debt, the slave’s promise to repay everything is absurd. The king does not merely postpone or reduce the debt—he cancels it.1

Ultimately, this parable is a lesson on how God, who is the Forgiving King, loves and forgives all of us in ways that far exceed our ability to comprehend (or repay). We often take for granted the enormity of our sin debt, which has been forgiven, forgotten, and canceled through the redemptive work of Christ on Calvary’s Cross. It is our faith in His work, and not in our works, that brings us into a loving, forgiving, eternal fellowship with God.

Our “happily ever after” is found, not in a political ideology, social movement, “cancel culture,” censorship, wealth, influence, notoriety, or power. These are the broken cisterns God says will “hold no water” (Jeremiah 2:13). It can only be found through faith in Jesus Christ—and Him crucified.

But unfortunately, immediately after the forgiven and restored Unforgiving Servant leaves the king, he meets another servant who owed him a few dollars. Compared to the massive debt forgiven, this minuscule debt should have been easily forgiven—and forgotten!

Yet, the Unforgiving Servant explodes in anger and assaults his fellow servant by grabbing him by the throat, violently choking him, and yelling, “Pay me what you owe me!”

The unfortunate fellow servant acknowledges his debt and begs for mercy. But instead of demonstrating forgiveness as he received, the Unforgiving Servant responds towards his fellow debtor with savage and utter ruthlessness by punishing him with harsh treatment and imprisonment until that minor debt was paid.

One might think that appropriate force was applied to secure an outstanding debt. But this line of thinking is flawed since understanding and compassion were warranted here. Both servants encumbered a debt beyond their ability to pay, and the likelihood of servicing the debt from prison was a remote possibility.

The Unforgiving Servant also failed to realize God created us to inhabit the earth as equals. And since we’ve all sinned and missed the mark (Romans 3:23), we are debtors to God and to each other equally by default. In other words, we are guilty of committing sinful acts against God or each other, either directly by commission or indirectly by omission.

Thus, none of us are “perfect,” nor should we encumber another person or race with the debt of unforgiveness. All of us are offenders whether we share the same culture, color, or language, and we must be willing to accept that no one particular race “cornered the market” on victimization or being victimized. Other races have faced discrimination, injustice, and hostility throughout history around the world.

Moreover, our inherent sin nature will ensure injustice, exploitation, and victimization will exist and thrive as long as we live on earth.

The parable ends with the Forgiving King confronting the Unforgiving Servant about his unforgiveness and cruelty, and He turns him over to the jailers to be tortured until the massive debt is paid. The parable’s central message is clear, God forgives us, and He expects us to forgive others in like manner! A stern, somber warning follows in verse 36,

“This is how my heavenly Father will treat each of you unless you forgive your brother or sister from your heart.”

As forgiven followers of Jesus Christ, we are called to promote an environment where people can forgive and live “happily ever after.” Born Again, we can exhibit a higher level of spiritual and moral acumen that forgives, accepts, and embraces others equally to enhance and preserve civil society. Thus, as a Christian, I have to acknowledge God created us to love, forgive, and support each other. Otherwise, our alternative is repression, anarchy, hostility, and more senseless violence.

Our love and forgiveness contrasts the snobbery and prejudice the world accepts and embraces. The miracle of our Christian synergy validates God’s grace in a cold, cruel, and lonely world where smiles are rare, and people are too busy to establish and maintain meaningful connections.

We yearn for such opportunities and enjoy fellowship with our brothers and sisters as we share meals, celebrate birthdays, weddings, and other special occasions where no one feels like a stranger or an outcast.

Jesus Christ is a friend who sticks closer than a brother does (Proverbs 18:24), and He has equipped us to love and care for our Christian brothers and sisters everywhere. Although we may disagree about dogma or our form of worship; we may even be separated by race and/or culture.

Because the Holy Spirit lives within us, we can look beyond our human differences to unite in Christ; as we see each other—not through our eyes—but through the eyes of Jesus Christ who laid down His life for His friends (John 15:13).

I am troubled over how passionately we express disdain towards those in political leadership who do not share our political views. Our expressions are  often to the point of hatred when we should demonstrate how we are one in Christ as blood-washed and blood-bought Saints of God.

Under those circumstances, our evangelism is never frustrated, nor is Christ’s witness invalidated due to our petty human divisiveness. Instead, we proclaim how God loves and seeks reconciliation with a sin-cursed humanity. We can celebrate our diversity by treating each other with the utmost respect, acceptance, and honor. Here, our fellowship is never optional—it is compulsory.

The world craves this unifying message of acceptance of others through Christ, which offers us a glimpse of what Heaven will be like with its rich diversity of people united under the lordship of Jesus Christ. John saw our future in this context, while he was on the Isle of Patmos:

After this I beheld, and, lo, a great multitude, which no man could number, of all nations, and kindreds, and people, and tongues, stood before the throne, and before the Lamb, clothed with white robes, and palms in their hands; And cried with a loud voice, saying, Salvation to our God which sitteth upon the throne, and unto the Lamb (Revelation 7:9–10 AKJV).

Because we are all precious in His sight, we can view each other through His loving eyes.