For January 19, 2020
The moon must have been especially bright on the evening when Nicodemus met Jesus privately, as John records in the third chapter of his gospel. Scripture is silent regarding the meeting’s exact time and place except where John 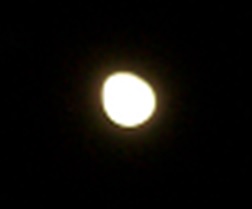 tells us it happened during Passover, which is a major Jewish observance that runs concurrently with the Feast of Unleavened Bread from the fourteenth day through the twenty-first day of the first month of the Jewish calendar or Nisan.1

During this week of feasting and celebration, massive throngs of people flooded Jerusalem from all over the world. Every Jewish male was required to attend this observance, which commemorates Israel’s Exodus from over four hundred years of Egyptian slavery.2

It was on this very special occasion when the Lord Jesus Christ offered the hallmark passages of our Christian Faith:

For God so loved the world that He gave His only begotten Son, that whoever believes in Him should not perish but have everlasting life. For God did not send His Son into the world to condemn the world, but that the world through Him might be saved. He who believes in Him is not condemned; but he who does not believe is condemned already, because he has not believed in the name of the only begotten Son of God. John 3:16-18 (NKJV)

God saved you by his grace when you believed. And you can’t take credit for this; it is a gift from God. Salvation is not a reward for the good things we have done, so none of us can boast about it. For we are God’s masterpiece. He has created us anew in Christ Jesus, so we can do the good things he planned for us long ago.

We Christians define God’s gift of love and forgiveness as revealed through the redemptive work of Jesus Christ (i.e., His death, burial, resurrection, ascension, and future return), as grace, which is understood as:

Favor, gracious care or help, goodwill…that which one grants to another; the action of one who volunteers to do something…to which he [or she] is not bound.3

By faith alone, we benefit from His mercy. In other words, through our faith, we are spared from His wrath due to our sin. Instead, now we have access to God’s priceless gifts of eternal joy, peace, and delight. Ultimately, we no longer rely on our futile, human efforts to earn God’s favor through our own “good works.”  Instead, we rely solely on the “perfect works” of Jesus Christ—as we trust Him for everything else.

Now we have the goodness, loving-kindness, mercy, and favor He designed for us (and those around us) when He created the world. Until He returns for us, His Holy Spirit keeps, strengthens, and increases our Christian faith with an undying affection, gratitude, and power to perform His good works that benefits everyone and us while He receives the glory.