For October 18, 2020
Matthew 18:21-35, presents a sober lesson on forgiveness; there, Peter asks Jesus how often should we forgive. Seven times? Jesus responds with seventy times seven. To illustrate the necessity of forgiveness, Jesus offers a Parable of the Unforgiving Servant to make this point,

Then the king called in the man he had forgiven and said, ‘You evil 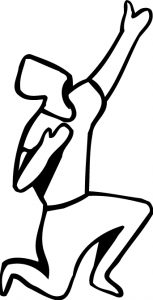 servant! I forgave you that tremendous debt because you pleaded with me. Shouldn’t you have mercy on your fellow servant, just as I had mercy on you?’ Then the angry king sent the man to prison to be tortured until he had paid his entire debt. That’s what my heavenly Father will do to you if you refuse to forgive your brothers and sisters from your heart (Matthew 18:32-35 NLT).

For the better part of three years, the Lord has been teaching His Disciples about humility and self-denial. In addition, He was their prime example of humility and self-sacrifice. (As He emptied Himself of His deity, took on a human form, and offered Himself as our payment for sin.) Yet the Disciples did not yet understand the importance of serenity and forgiveness.

In this parable, God is the Forgiving King who loves and forgives us in a way far beyond our ability to comprehend. We often take for granted the enormity of our sin debt, which has been forgiven, forgotten, and canceled through the redemptive work of Christ. We are not in a position to make “sin comparisons” towards other people since we all have sinned and are deficient of God’s righteous standards (Romans 3:23).

At the time He spoke this parable, the talent was the largest measurement for precious and non-precious metals for the Jews. Its weight ranged from 90 to 120 pounds, or what a “normal man” could carry, and it represented the wages a common person earned over a lifetime. Its value was somewhere between $1,000.00 and $1,500.00 in today’s US dollars. Multiply this by ten thousand, or the debt we have been forgiven, and we are looking at an amount ranging between $10 and $15 million U.S. dollars.

The parable makes no mention of how the debt was incurred. But as an integral part of his master’s household, the servant could have incurred it through fraudulent transactions while acting on his master’s behalf. Nevertheless, the servant was guilty of mismanagement by being solely responsible for a massive debt, and the Forgiving King was well within his rights to order the servant and his family to be imprisoned and/or his property seized until the entire debt was repaid.1

The servant had nothing of value to bargain with. He owned nothing that would satisfy a debt that would have taken him several lifetimes to repay. In addition, the likelihood of him repaying the debt from prison was utterly preposterous. So he falls on his knees and begs for mercy, “Be patient with me, and I will pay you back!” (Matthew 18:29), and the Forgiving King does something extraordinary as one writer observes,

In the parable, the first slave owes the king ten thousand talents. Given the enormity of his debt, the slave’s promise to repay everything is absurd. The king does not merely postpone or reduce the debt—he cancels it.2

Immediately after the unforgiving servant left the king, he meets another servant who owes him 100 denarii, the most basic unit of Roman coinage, equalling a normal day’s wage of approximately sixteen or seventeen cents in today’s US money.3 When multiplied by one hundred, this was a minuscule debt totaling no more than seventeen dollars.

Compared to the massive debt forgiven, this minuscule debt could have been forgiven and forgotten…easily. But instead, the unforgiving servant explodes in rage, grabs him by the throat, and chokes him while yelling, “Pay me what you owe me!” (Matthew 18:28) The unfortunate fellow servant acknowledges his debt and begs for mercy: “Have patience with me and I will repay you!” (Matthew 18:29) And although both servants beg for mercy, there were two vastly different responses.

As the wisest man who ever lived, King Solomon had it right when he observed, “Love prospers when a fault is forgiven, but dwelling on it separates close friends” (Proverbs 17:9 NLT). And as it was two thousand years ago, it is still true today; we live in a world that prefers retaliation over reconciliation.

The Lord characterized the “end times” as a period of escalating hostility. Since today we are encouraged never to show weakness or to allow others to take advantage of us, the signs of the times include the heightened levels of random assaults, workplace violence, and civic unrest. Although tragic, these are the byproducts of a fallen, unforgiving, violent, “dog-eat-dog” world where “only the strong survive,” and the “ends always justify the means.” Because “it’s never personal; it’s only business.”

It was only natural for Peter to ask the question, “How often should I forgive—seven times?” Because from our human perspective, forgiving once is remarkable, and forgiving seven times is extraordinary since we keep track of offences, and we bear grudges. We also rate sins on a sliding scale as though one is more heinous than another, and we falsely characterize people for their sinful past.

We must accept the fact that no one race has “cornered the market” on victimization or being victimized. All races have faced discrimination, injustice, victimization, oppression, and hostility in this country or around the world. The presence of sin within each of us will ensure we will always have injustice on earth.

Thus, it is hypocritical to condemn others when we all have “skeletons” in our closet as Jesus observes,

Nevertheless, we who have experienced God’s love and forgiveness through Christ, by our faith in Him, are forgiven—to the extreme, because our sin debt is greater than our ability to pay…in a hundred lifetimes. Jesus paid it for us and cancelled our debt forever at Calvary’s Cross.

Having received His great gift, our time is better spent forgiving others (just as He has forgiven us) as King Solomon also observes,

“For as churning cream produces butter, and as twisting the nose produces blood, so stirring up anger produces strife” (Proverbs 30:33 NIV).

As forgiven followers of Jesus Christ, we are called to exhibit a higher level of spiritual and moral acumen; one that accepts and embraces others so that we can enhance and preserve civil society. Thus, we need to adjust our sliding scales to accommodate our own failings because we are guilty of offending someone—particularly God. We cannot forgive only to a certain level. We must forgive completely (seventy times seven). This is radical forgiveness.

The parable’s central message is clear. God forgives us, and He expects us to forgive others in like manner. While we await His glorious return, our Lord Jesus Christ expects us to practice a radical forgiveness that glorifies Him while transforming others and us. Why not start today?