For March 14, 2021
In Jesus’ day, people did not have access to the many forms of motorized transportation (i.e., motorcycles, cars, trucks, trains, airplanes, etc.) we have today. In addition, the roads were not paved. So depending on the terrain and weather conditions, travel could be extremely messy.

People who could not afford to ride 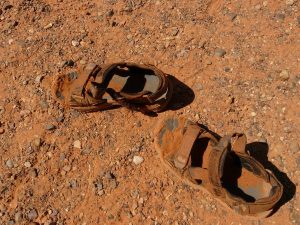 animals (i.e., camels, donkeys, horses, etc.) walked, exposing their sandaled feet to dirty roads—sometimes checkered with animal feces. Thus, as a common courtesy (and sanitary reasons), the host provided for foot washing since the guest’s feet were soiled by the time they reached their destination.

Also in Jesus’ day and culture, people ate while reclining on one side—sometimes with their feet extended toward other guests,

Reclining on the triclinium, or dinner bed, the guest lay usually upon his left side, leaving his right hand free to reach for food. His head would thus easily come into contact with the breast of the person on his left. It was in this way that John leaned on the bosom of Jesus while at supper.1

Foot washing was the task reserved for the lowest ranking person (or servant) in the household. However, in this instance, Jesus “flipped the script” by washing the Twelve Disciples’ feet as if He was the lowest ranking servant. In so doing, He teaches an unmistakable object lesson on humility to the astonishment of His Disciples,

It was at this juncture that Jesus washed the feet of the Disciples. It was an object lesson to impress upon them the quality of true greatness. He was their Lord, and yet He became their servant as He laid aside His garments, took a towel and girded Himself, poured water into a basin, and stooped to wash the feet of His Disciples. Jesus was not instituting an ordinance like that of the Lord’s Supper but was giving an object lesson in true humility of spirit.2

The Lord exercises great patience with His Disciples’ failure to understand the importance of humility and selflessness. He was their Rabbi (leader and teacher), yet He lowered Himself to serve them when it was their obligation to serve Him. (To the Disciples’ credit, there was no designated servant present to wash their feet since the gathering was a private one.)

The Disciples also failed to grasp the vast spiritual dimension of the Kingdom of God where our Lord reigns forever in full majesty and glory. (They were too busy arguing about who would be “greatest” in the Kingdom and forgot that someone within their ranks should have performed the task.)

Jesus teaches His Disciples what constitutes true greatness—humility—especially for His people. His actions were consistent with His earlier teachings, “If any man will come after me, let him deny himself, and take up his cross, and follow me” (Matthew 16:24 AKJV).

Jesus was the ultimate example of humility as He relinquished His deity and took on human form to pay for our sin,

Though he was God, he did not think of equality with God as something to cling to. Instead, he gave up his divine privileges; he took the humble position of a slave and was born as a human being. When he appeared in human form, he humbled himself in obedience to God and died a criminal’s death on a cross (Philippians 2:6-8 NLT).

Because of Jesus’ humility, we now can have God’s great love and forgiveness through our faith in His redeeming sacrifice on Calvary’s Cross. Our humility and surrender is essential to receiving these blessed gifts from God,

Likewise you younger people, submit yourselves to your elders. Yes, all of you be submissive to one another, and be clothed with humility, for “God resists the proud, But gives grace to the humble” (1 Peter 1:5 NKJV).