For April 4, 2021
All humanity was in spiritual peril. Sin and death bound us, where there was no escape. But, Jesus’ single magnificent act would change the course of our future once and for all.

Up to now, Jesus Christ was like any other person who has ever spouted lofty ideals, performing magical tricks, and leading a group of misfits and non-conformists. This behavior was seen before. (Although raising the widow’s son, Jairus’ daughter, and Lazarus from the dead were spectacular accomplishments.)

He was approximately thirty-three 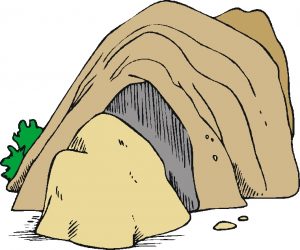 years old, give or take—a relatively young man—cut down in the prime of His life. His claim to be God in human flesh, (or the Son of God), along with His claim to be our only means of redemption were without validation to this point. Then, something happened that distinguishes Him from anyone who has ever lived.

Jesus Rose from the Dead!

Through His resurrection, God glorifies the Son and validates His authority over Satan, sin, and death, making Him the most significant person who has ever lived, and it ensures us that He will not disappoint those of us who put our faith in Him,

By any and all standards, Jesus Christ has always been regarded as the greatest figure in human history. On any list of the world’s greatest men, we always find at its head Jesus of Nazareth. Regardless of whether or not men acknowledge Him as Savior and Lord, they must pay tribute to Him as the world’s outstanding man. 1

Many refer to Jesus as a prophet or teacher. Some say He was a good man who died tragically. If death was all there was, we would be hopelessly lost. But, praise the Lord! Jesus’ death is not all that there was to know about Him. He also rose from the dead, and He left behind an empty tomb. Although some have tried, we cannot ignore the implications of this historical fact.

I and my Father are one…I will pray the Father, and He will give you another Helper…the Spirit of truth…I will not leave you orphans; I will come to you (John 10:30, 14:16-18 NKJV)

Therefore God exalted Him to the highest place and gave Him the name that is above every name, that at the name of Jesus every knee should bow, in heaven and on earth and under the earth, and every tongue acknowledge that Jesus Christ is Lord, to the glory of God the Father (Philippians 2:9-11 NIV).

And though after my skin worms destroy this body, yet in my flesh shall I see God (Job 19:26 AKJV).

Therefore, my dear brothers and sisters, stand firm. Let nothing move you. Always give yourselves fully to the work of the Lord, because you know that your labor in the Lord is not in vain (1 Corinthians 15:58 NIV).

The foundation of our Christian faith is the actual bodily resurrection of Jesus Christ. Because of it, we sorrow not as others who have no hope (1 Thessalonians 4:13),

This is but natural, as Christianity must stand or fall with the resurrection. Christ “rose from the dead,” has always been a cardinal article of faith in the Christian Church; for the defense of the faith and comfort to the Believers. The difficulties that beset denial are found in: (a) the impossibility of explaining the empty grave; (b) the attitude of the enemies of Christ after the resurrection, revealing their helpless confusion; (c) the Disciples’ sudden transition from hopelessness to triumphant faith; (d) the founding of Christianity in the world, which can be rationally accounted for only in view of the fact that Christ actually rose from the dead.2

Our Christian faith, history, and theology derive from the idea that Jesus Christ rose from the dead physically. Along with the Disciples we, His Followers today, universally accept this as fact. And despite the two thousand years of skeptics, our Christian faith has never been a product of “lies, fraud, hallucinations, and sick minds.” Courageous, clear-minded Saints of God continue to die for their faith in the Lord because they know Him to be authentic and eternal. Christian faith stands or falls with the resurrection of Jesus.3

Our Lord willingly died to pay for our sins, and He triumphantly rose for our justification. He ascended into Heaven, where He now sits at the right hand of God, interceding for us. Soon, He will return for us, and we will be with Him forever in His peace and love. Won’t you trust Him today?

Jesus is risen…He is risen indeed!