For April 25, 2021
Through God’s Creation, we can see God’s majesty and design in the most intricate detail to invoke our happiness and well-being.

But unfortunately, there has been speculation about 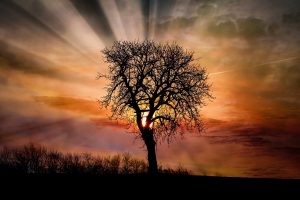 our human identities—whether or not we are male and female. Unfortunately, the tone, content, and trajectory of these recent discussions have suggested that God made errors during His marvelous creation that now require human intervention to remedy.

The Bible declares otherwise. Colossians 1:16-17 tells how the Lord created all things, including us. Further, the Bible states that in the beginning, as God was completing His perfect creation of Heaven and the Earth, He created a human male (Adam) and a human female (Eve) and placed them in the Garden of Eden,

So God created man in His own image; in the image of God He created him; male and female He created them (Genesis 1:27 NKJV).

As He did with His other created beings, God told Adam and Eve to “be fruitful, and multiply.” Thus, He renders an irrefutable purpose and destiny for our human species,

Then God blessed them, and God said to them, “Be fruitful and multiply; fill the earth and subdue it; have dominion over the fish of the sea, over the birds of the air, and over every living thing that moves on the earth” (Genesis 1:28 NKJV)

Concerning our being made in God’s image, one writer makes this observation,

It is clear that man, as God made him, was distinctly different from the animals already created. He stood on a much higher plateau, for God created him to be immortal, and made him a special image of His own eternity. Man was a creature with whom his Maker could visit and have fellowship and communion. On the other hand, the Lord could expect man to answer Him and be responsible to Him. Man was constituted to have the privilege of choice, even to the point of disobeying his Creator. He was to be God’s responsible steward on earth, to work out his Creator’s will and fulfill the divine purpose.1

The Psalmist describes how God made us “fearfully and wonderfully” in Psalm 139,

You made all the delicate, inner parts of my body and knit me together in my mother’s womb…You saw me before I was born. Every day of my life was recorded in your book. Every moment was laid out before a single day had passed (Psalm 139:13-16 NLT).

Fearfully (Hebrew: yare) implies standing awe-inspired and rendering tremendous respect for God’s exquisite creation.2 In other words, fearfully happens as we recognize our God-given “mystery” of being special or unique, which cannot be recreated by finite humans. Only our omniscient, omnipotent God can infuse blood, bone, tissue, and flesh with His Spirit to create special and unique creatures such as human beings.

In addition, wonderfully (Hebrew: pala) conveys the idea of being separate or distinct.3 It is worth noting that not only is the human species “separate and distinct” from other created beings. Our internal components are also separate and distinct from each other. (This can explain how the Apostle Paul chose the human body as a metaphor in Romans 12:3-5 to describe how Christians can be many distinct members, and yet we are one cohesive body.)

However in the grander scale, human beings are separate and distinct from all other created beings just as God is special and unique; separated from all other gods. Only He could breathe in us the “breath of life” that eternally distinguishes us from everything else He created (Genesis 2:7).

Genesis 2:15 tells how the Lord placed Adam in the Garden of Eden to manage and cultivate it. Thus, ours is a solemn stewardship because we have dominion over the land, air, and aquatic creatures and the responsibility to cultivate vegetation, minerals, and water for its proper use and our benefit.

Yet, there are those who fail to see themselves as His greatest creation—greater than Mount Everest, the Grand Canyon, Aurora Borealis, the Amazon Rainforest, and the sun, moon, and stars combined.

The Psalmist also declares that God designed us to be lower than the angels, but we are crowned with glory and honor with all things under our feet (Psalm 8:5). Truly, God has given us an amazing pedigree that is up to us to accept.

Thus, God made no mistakes when He created us. For everything He made was very good! (Genesis 1:31)

However, we must never let our pride deceive us into believing we are the Creator God while He is the created. Psalm 36:6 tells us God preserves humans and animal kingdom. In other words, God preserves the earth and all that is in it as this author notes,

Preservation is that continuous agency of God by which He maintains in existence the things He has created, together with the properties and powers with which He has endowed them…Preservation implies a natural concurrence of God in all operations of matter and of mind…Without His concurrence, no person or force can continue to exist or to act.4

We are fearfully and wonderfully made in God’s incredible image. He loves us with an eternal love that transforms us into the image of Christ—through faith. Ultimately, He made no mistake when He made you or me to be His special and unique children. Won’t you trust Him today?