For July 3, 2022
In the beginning, God created Heaven and earth. Before resting, He created man and woman and placed them in the Garden of Eden. God created the human species to be His crowning achievement by making us in His image and entrusting us to have dominion over His earthly creations,

Then God said, “Let us make mankind in our image, in our likeness, so that they may rule over the fish in the sea and the birds in the sky, over 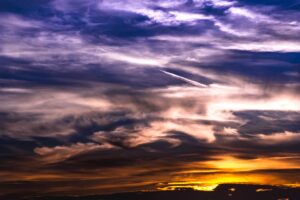 the livestock and all the wild animals, and over all the creatures that move along the ground.” So God created mankind in his own image, in the image of God he created them; male and female he created them. God blessed them and said to them, “Be fruitful and increase in number; fill the earth and subdue it. Rule over the fish in the sea and the birds in the sky and over every living creature that moves on the ground.” Genesis 1:26-28 (NIV)

Genesis 1:31 tells us God considers all His creation to be “very good!” Through His Creation, we clearly see His majesty and design in the most intricate detail to invoke our feelings of happiness, purpose, and well-being.

The Psalmist declares the Lord made us lower than the angels, crowned us with glory and honor, and He placed all things under our feet (Psalm 8:5). Truly, God has given us an amazing pedigree that is up to us to accept.

He made you and me in His image for eternal fellowship, bound by His unselfish love and complete acceptance. He wants us to experience His “very best” for us in every way—spiritually, physically, and emotionally.

We should never consider ourselves to be mistakes or afterthoughts. We are His special, unique individuals whom He has created to fulfill His perfect, eternal design for the universe. God created you and me, with all our complexity, to function according to His perfect design.

It saddens me people chose not to see themselves as God’s beloved creation; greater than Mount Everest, the Grand Canyon, Aurora Borealis, and the sun, moon, and stars combined—in His loving eyes.

Satan’s job is to confuse and distort God’s perfect plan by telling us we are flawed and worthless. He has convinced many of us we are “ugly” and/or we “won’t amount to anything.” As a result, many of us believe we will be “nothing but failures” in this life.

But these are lies, for no two of us are exactly alike by design. God created us differently, much as if the pieces of a jigsaw puzzle that when assembled create a beautiful portrait of His love, redemption, and glory.

Unlike any other created being, He has given us the ability to choose a life that reflects His dignity and affect positive changes in ourselves and others. God has also given us the freedom to choose where we will spend our eternity; in Heaven with Him or in Hell separated from Him. Jesus describes Hell as a place where there is weeping and gnashing of teeth; where the worms never die and the fire is not quenched (Matthew 13:42, Mark 9:48).

The “weeping and gnashing of teeth” is the self-inflicted consequence of those who chose to reject Christ when they should have accepted Him in this life. For in death, atheism and agnosticism no longer exist when we stand before our Creator and Maker; instant “believers” in God’s existence, and His perfect, final judgement.

Unfortunately, there are many who have chosen to spend an eternity separated from God. They will regret not accepting the grace and mercy Jesus freely gives us through His vicarious death for our sin and resurrection for our justification. (Romans 4:25)

Adam and Eve chose to disobey God and sin and death were their punishment ,,,and ours. But Jesus Christ, the Son of God, freely chose to give up His perfect, sinless life for our sinful and imperfect ones, so that God could forgive our sins and give us His eternal, abundant life. (cf. John 3:16-17, Romans 3:23, 5:19, Ephesians 2:1-10)

Joshua in the Old Testament also made a choice. The Lord tasked him with the responsibility of providing spiritual, moral and civic leadership to a group of seventy folk who had now swelled into a massive throng of well over two million.

For 110 years, he showed an unwavering commitment to serve the Lord under Moses’ tutelage. He was with Moses at Mount Sinai when the Lord gave Moses the Law. He also helped Moses lead God’s people through the wilderness. The only families the Lord allowed from Egypt into the Promised Land were his family and Caleb’s.

Joshua chose to remain faithful to the Lord, and he and his family received their portion of the Promised Land. So committed was Joshua, that just before he dies, he offers a challenge that still inspires God’s people,

Now fear the Lord and serve him with all faithfulness. Throw away the gods your ancestors worshiped beyond the Euphrates River and in Egypt, and serve the Lord. But if serving the Lord seems undesirable to you, then choose for yourselves this day whom you will serve, whether the gods your ancestors served beyond the Euphrates, or the gods of the Amorites, in whose land you are living. But as for me and my household, we will serve the Lord.  Joshua 24:14-15 (NIV)

We can choose to be living examples of God’s love and grace in the world instead of weapons for death and destruction. Won’t you choose to be God’s crowning achievements of creation and salvation by living out living out His redemptive plan? We all have a choice—choose to serve the Lord!